Srikar Bharat is an Indian cricketer who represents India and Andhra Pradesh at the domestic level as a wicket-keeper batsman. In the Indian Premier League, he played for Royal Challengers Bangalore (RCB).

He was born in the state of Andhra Pradesh, in the city of Visakhapatnam. Srikar Bharat, often known as KS Bharat, has the record for being the only wicketkeeper in the Ranji Trophy to score a triple century. 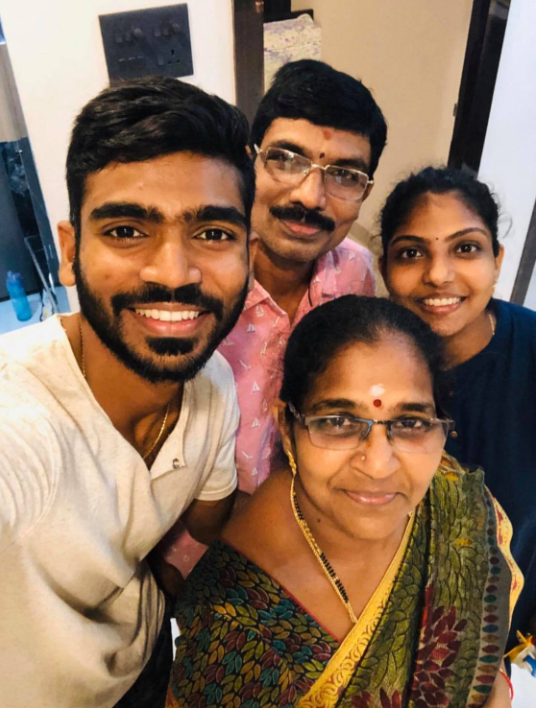 Kona Srikar Bharat, or KS Bharat, was born to a Naval Dockyard Employee (Father: Srinivas Rao).
Kona Devi (Mother) in October 1993. Manoghna Lokesh, his sister, is his other sibling.

He was a highly active child when he was younger. His parents enrolled him as a ball boy at a local cricket club because of his restless disposition.

Mr J. Krishna Rao, KS Bharat’s coach, recognised his talent at the age of 12 and urged him to pursue a career as a wicket-keeper batsman. Srikar Bharat has represented India at all levels of early cricket, from Under-13 to Under-19. At all levels, he represented Andhra Pradesh.

Srikar did not have a fantastic start to his List-A career, scoring only one run against Tamil Nadu in his debut. In that match, he played as an opener for Andhra Pradesh.

He got his first taste of first-class cricket with a brisk and aggressive 37 in the second innings of his debut match.

In domestic T20 cricket, Bharat has not proven to be a particularly good batsman, with a poor strike rate.
However, because of his outstanding wicket-keeping abilities, he is frequently retained in his domestic team.

A player’s genuine talent is frequently unjustified by the metrics. Srikar Bharat appears to be in the same boat. While his T20 strike rate and average are both poor, he can play explosive innings that have a big impact on the game. His 62 runs in 34 balls against Puducherry at Wankhede is a great illustration of this.

After amassing 758 runs in the 2014-15 Ranji Season, Bharat had significantly improved his first-class record. That season, he had a 54-point average. In the 2018-19 Duleep Trophy, Srikar Bharat was picked to the India blue team.

Srikar Bharat had his first taste of the Indian Premier League (IPL) in 2015, when he was purchased for Rs.10 lakhs by the Delhi Daredevils in the 2015 auction.

That season, he didn’t get to play in any games. Later, in the 2021 Auction, he was purchased by the Royal Challengers Bangalore (RCB). This season, he got famous for a last-ball six against the Delhi Capitals.
He led his team to victory in that match by scoring 78 off 52 balls.

In November of 2019, he was named to the team that was slated to play Bangladesh in the second test as a replacement for Wriddhiman Saha.

He was added to the ODI squad for the series against Australia a few months later as Rishabh Pant’s replacement after the latter suffered a concussion. Bharat has also been picked as a standby player for the England Test series in 2021.

After Wriddhiman Saha’s injury in the first test of New Zealand’s tour of India, he was called in as a substitute wicketkeeper. He was successful in taking two catches and participating in a stumping.

Srikar Bharat is an Indian Wicket Keeper Batsman who plays for Andhra Pradesh at the domestic level.

[For more latest updates and stories on Indian sports (and athletes), subscribe to the timesofsportsnetwork today-

We use cookies on our website to give you the most relevant experience by remembering your preferences and repeat visits. By clicking “Accept All”, you consent to the use of ALL the cookies. However, you may visit "Cookie Settings" to provide a controlled consent.
Cookie SettingsAccept All
Manage consent

This website uses cookies to improve your experience while you navigate through the website. Out of these, the cookies that are categorized as necessary are stored on your browser as they are essential for the working of basic functionalities of the website. We also use third-party cookies that help us analyze and understand how you use this website. These cookies will be stored in your browser only with your consent. You also have the option to opt-out of these cookies. But opting out of some of these cookies may affect your browsing experience.
Necessary Always Enabled
Necessary cookies are absolutely essential for the website to function properly. These cookies ensure basic functionalities and security features of the website, anonymously.
Functional
Functional cookies help to perform certain functionalities like sharing the content of the website on social media platforms, collect feedbacks, and other third-party features.
Performance
Performance cookies are used to understand and analyze the key performance indexes of the website which helps in delivering a better user experience for the visitors.
Analytics
Analytical cookies are used to understand how visitors interact with the website. These cookies help provide information on metrics the number of visitors, bounce rate, traffic source, etc.
Advertisement
Advertisement cookies are used to provide visitors with relevant ads and marketing campaigns. These cookies track visitors across websites and collect information to provide customized ads.
Others
Other uncategorized cookies are those that are being analyzed and have not been classified into a category as yet.
SAVE & ACCEPT